Craig Fass and The Bad Apple do Hop Chef 2013

Remember those little piggies we fed all that wonderous Ommegang brew to? Well this is what they look like prepared with Three Philosophers soaked cherries and cracked black pepper and pecorino blue corn grit cakes. You'll have to excuse the drooling. Craig Fass from The Bad Apple and his crew did an amazing job of serving up these flavorful tiny bites for Chicago's foodies and craft beer fans on Monday night. This is coming from a completely neutral party since, ya know, I have ZERO affiliation with The Bad Apple, but Craig's creation was the most flavor packed, savory punch to the mouth I received all evening and in my heart Mr. Fass and The Baps will always be the true winners. Though their win was well deserved, it came as no surprise that Chef Cosmo Goss and The Publican took home the judges vote and we were all happy for our Lincoln Square neighbor Chef Tim Cottini of Fork Restaurant to take home the People's Choice vote. Hop Chef 2013 was a great night spent mingling with some of Chicago's finest industry peeps and we were all honored to be there. This is a little slice of our evening dedicated to all our homies that held down the fort on Monday night. Rock on. 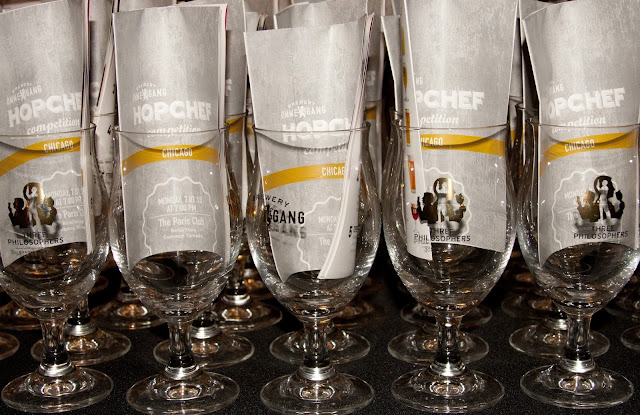 Posted by Baby Rabbit at 2:37 PM No comments:

Finally, after almost a year with no new posts, after almost two years with no digital camera, I got my hands on one and shot some worthy material. A few of my Bapple peeps and I headed down to Catalpa  Grove Farms in Dwight, IL to feed our little Berkshire Piggies some beer. The beverage of choice was Brewery Ommegang's Three Philosophers, a Belgian style quadrupel. And why feed a bunch of cute piglets a finely crafted brew you ask? Because lets be honest, you don't show your love and appreciation for pork by showing up with a case of High Life. Also, the incredibly talented chef Craig Fass of the Bad Apple had been chosen to compete in the first annual Hop Chef Chicago competition in which each chef must create a complimentary dish to one of Brewery Ommegang's delicious beers. Craig had the genius idea of snagging a few photo ops with the little Berkies enjoying Three Philosophers, since this is of course the beer they'd be paired with later in the competition. Genius I tell ya. In all seriousness though, it was a really great opportunity for some of the Bad Apple gang to meet the people that raise our goat, lamb and Berkshire Pork. Also, it may seem like an odd notion to some, but it was actually an incredibly humbling experience gettin' muddy with the animals that we gorge ourselves on every evening at work.  Here's to all my fallen Berkies in heaven. Much love. 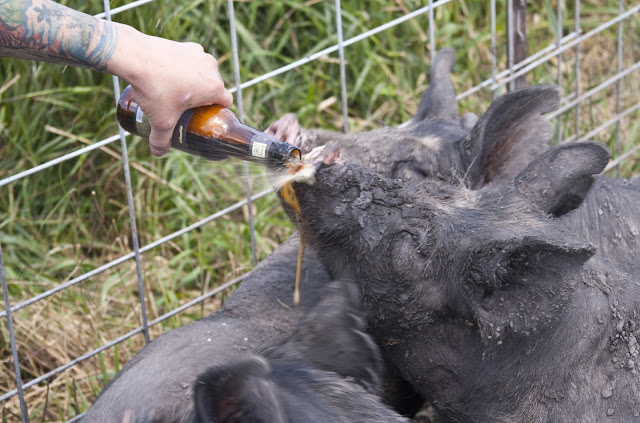