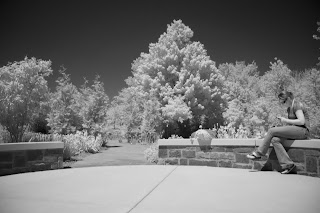 Ok, right off the bat I need to say THANK GOD for Kansas City and my good friends and hosts Meghan and Jack Manly. This city proved to be the perfect recovering grounds from the ravaging’s of Memphis. I went to bed every night at a reasonable hour and sober none the less. Which, apparently provides a more restorative sleep session, who would’ve thought?! 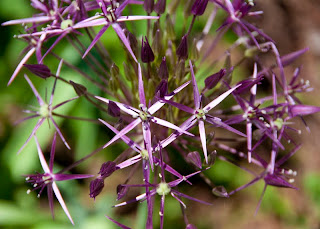 Right around 12 p.m. Meghan would arrive home early from work and we would begin our calm but still interesting adventure through Kansas City’s museum and culinary offerings. Monday, seeing as all the damn museums were closed, we decided to spend the day at the botanical gardens. The best part of this was taking my first photo with an infrared lens. I didn’t say it was a good photo, but it’s the first so you must love it anyways. Otherwise it was just a nice day, catching up with Meghan, recalling stories of our infant-hood spent together. Later that evening we decided to eat at a place called Grinder’s. Apparently they’ve been featured on Diner’s, Drive-In’s and Dive’s and seeing as Honky Tonk is a fellow DDD member I figured Guy Ferreri (i hate you i hate you i hate you) might know what he’s talking about food wise. It was pretty outrageous. See photo below to find out what "bomb it" means in reference to pizza.

Later that evening, feeling like I was going to vom until at least 1 in the morning from the amount of food I had consumed, Jack introduced me to Ninja Warrior. Fucking amazing show. I haven’t had proper television in about a year and half so I was glassy eyed and drooling in no time.

Tuesday, Meghan and I went to the Nerman Museum of Contemporary Art that wasn’t all that big but still pretty entertaining. It was so small that by the time be finished we had time to drive all the way downtown KC to go to the American Jazz Museum. Yes! 18th and Vine, the heart of Jazz. Kansas City was known for hosting most, if not all, of the most influential and talented traveling Jazz musicians in the biz. The place was a little over done and they hardly had any real memorabilia, but the music itself and the stories behind the music were enough to keep me entertained. The two works pictured were some of my favorite pieces at the contemporary art museum.

The most anticipated and the biggest disappointment (those two don’t uncommonly end up together) of the trip was our visit to BB’s Lawnside BBQ. Sarah from Sarah and the Tall Boy’s recommended this place having played there many times on their tours through the Mid-West. If I was listening to live music and getting shmammered all night, this would be the Kansas City equivalent of Honky Tonk and I’d have a shit eating grin on my face the whole time. If I was passing through KC to eat some delicious BBQ, I’d be let down by almost everything except for their Maker’s Mark price and their bread pudding. Service was great, food was mediocre and their sauce tasted like they dropped a can of tomato paste in a bottle of apple juice. GAG. 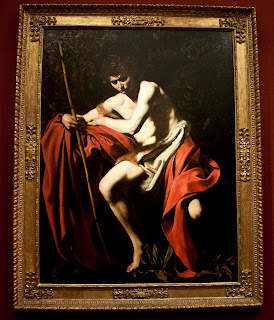 Wednesday was filled with a trip to the Nelson Atkins Museum of Art where we saw classic works. I saw one of seven Caravaggio paintings in the United States, St John the Baptist in the Wilderness painted 1604-1605 (pictured right). More importantly, I think I discovered how much I love Baroque works of art. The dramatic plays of light really hypnotize me and though I’m not a religious person in the least I find the religious scenes leave me a little moist, in the eye ball area. We also saw a really great Ray K. Metzker exhibit that left me in awe and wondering “Why the fuck didn’t I think of that?!?”. Last, but not least we saw Monet’s Water Lillies. A gorgeous tryptic painting that was cool and serene. I’m not an art critic so I’ll leave it at this; I saw a lot of really fucking great art in the past few days that I feel will inspire me for a while. 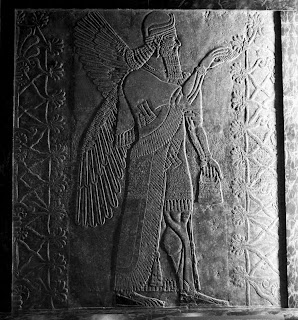 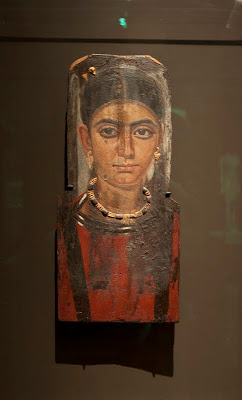 The women painted at right was one of my favorites from the Egyptian exhibit. It was painted some time between 130-161 C.E. and it's encaustic on a wood panel with guilt stucco. The encaustic technique uses organic colors mixed with hot beeswax to make the paint. There was a quote along with this painting used to as a metaphor, comparing the untouchable by time encuastic technique to love: "A beautiful woman leaves in the heart of an indifferent man an image as fleeting as a painting on water. In the heart of a lover, this image is fixed with fire like an enaustic painting, which time can never erase."

You'll have to excuse the slopped together- ness of this whole post. I'm still trying to figure out how to make text and photos look pretty together. Though, I do enjoy the fact that John The Baptiste is sitting below a mason jaw that is everything that represents America and how fucking god damn amazing we are. SHIT YEAH! :)
Posted by Baby Rabbit at 9:13 AM